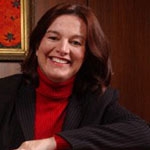 Geraldine Higgins specializes in twentieth century Irish literature and culture. She joined the Emory faculty in 1996 after completing a D.Phil. at Trinity College, Oxford and a B.A. in English and History at Trinity College, Dublin. In 2014, she was awarded the Massee-Martin/NEH Distinguished Teaching Chair for the term of 2014-2018.

Her two books and selected articles address the troubled connections between art and the representation of violence, the poet and the polis, tradition and modernity. Heroic Revivals from Carlyle to Yeats (Palgrave) examines the work of Carlyle, O'Grady, Russell (AE), Synge and Yeats, reassessing the aesthetic and political dimensions of the Revival's heroic ideal and its implications for the construction of Irish modernity. Her second book, Brian Friel (Northcote House), is a critical study of Ireland's most influential and important living playwright. This study of Friel places his work within the context of the Irish dramatic tradition and examines his position as a writer from the north of Ireland negotiating between the responsibilities of art and the demands of violent conflict. Higgins also writes about representations of Irishness in popular culture such as “The Quotable Yeats: Modified in the guts of the living” and “Tara, the O’Haras and the Irish Gone with the Wind.”

Professor Higgins is Director of Irish Studies at Emory and the curator of the acclaimed exhibition “Seamus Heaney: The Music of What Happens” showing at the Woodruff Library from February-November 2014. In 2016-2017, she will assume the directorship of the Yeats International Summer School in Sligo, Ireland.