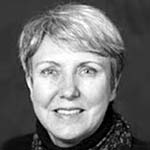 The Correspondence of Samuel Beckett

Lois Overbeck studied at Beloit College (B.A.), the University of Chicago (M.A.), and the University of Pennsylvania (Ph.D.). She edited The Beckett Circle of The Samuel Beckett Society (1984-1989), and she has published widely on Beckett and modern drama. She was a consultant for the Beckett Festival of Radio Plays, project director of a collaborative, city-wide festival, Beckett/Atlanta (1987) and a coordinator of the Year of  Beckett - 2006, Atlanta, a festival of performances, lectures and workshops (by international directors and scholars Walter Asmus, Marek Kedzierski, Michael Haerdter working with local theatres and universities) celebrating Beckett's centennial year. She edited, with Paul Jackson, a collection of essays and interviews on the plays of Adrienne Kennedy, Intersecting Margins (1992).