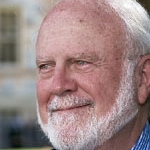 Ronald Schuchard, Goodrich C. White Professor of English Emeritus, came to Emory University in 1969 after completing his graduate work at the University of Texas, Austin. He teaches courses in 20th-century British, Irish and Anglophone literature and is the author of numerous studies of modern authors, particularly T.S. Eliot and W.B. Yeats. His new book, The Last Minstrels: Yeats and the Revival of the Bardic Arts was published by Oxford University Press in 2008. His Eliot’s Dark Angel (Oxford University Press, 1999), won the Robert Penn Warren--Cleanth Brooks Award for Outstanding Literary Criticism and the annual SAMLA Studies Award for the best book published by a member of the South Atlantic Modern Language Association. He is the editor of T.S. Eliot’s Clark and Turnbull Lectures, The Varieties of Metaphysical Poetry (Faber & Faber, 1993; Harcourt, Brace, 1994; Harvest, 1996), and co-editor with John Kelly of The Collected Letters of W.B. Yeats, Volume 3 (Oxford University Press, 1994); Volume 4 (2005), which won the Modern Langugage Association’s Morton N. Cohen Award for a Distinguished Volume of Letters, and Volume 5 in the same series, which is due to appear in 2008. He has been a Visiting Fellow at Wolfson College, Oxford, Trinity College, Dublin, Queen’s University, Belfast, and the Institute of English Studies, University of London, where he has been elected a permanent Senior Research Fellow. He is currently serving as General Editor of the multi-volume edition ofThe Complete Prose of T.S. Eliot, to be published by Faber and Faber and The Johns Hopkins University Press.

Professor Schuchard is a faculty advisor to the Manuscript, Archives, and Rare Book Library (MARBL) and devotes much time to developing the outstanding archive of twentieth-century Irish and English manuscript collections. He is the founder-chairman of the Richard Ellmann Lectures in Modern Literature, inaugurated by Seamus Heaney in 1988 and to be given by Umberto Eco in 2008. He is the former director of Emory’s British Studies Program at University College, Oxford, and of the Yeats International Summer School in Sligo, Ireland. He is an Honorary Member of the South Atlantic Modern Language Association and of the T. S. Eliot Society of St. Louis, and an active member of the Modern Language Association, the Association of Literary Scholars and Critics, the American Conference for Irish Studies, the International Association for the Study of Irish Literatures, the International Association of University Professors, American PEN, and the Grolier Club of New York. In addition to serving on the editorial boards of Yeats Annual, Texas Studies in Literature and Language, and The Recorder: Journal of the American Irish Historical Society, he is a member of the advisory boards of The Correspondence of Samuel Beckett and the W.B. Yeats Drama Foundation. His research has been supported by ACLS, NEH, Fulbright, and Guggenheim fellowships.

Professor Schuchard has taught graduate seminars on such recent topics as the Irish Literary Renaissance;Yeats and Joyce; Yeats, Eliot, and Pound; Eliot and Lawrence; Contemporary Irish Poets; and Thomas Hardy and Contemporary Poetry.