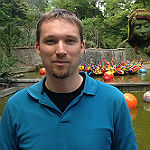 Nathan Suhr-Sytsma specializes in the intersections of postcolonial literary studies with twentieth- and twenty-first-century poetry. He is a core faculty member of the Institute of African Studies and Irish Studies at Emory. He regularly teaches undergraduate courses in African literature, Irish literature, and poetry, as well as a special topics course on how writers imagine the future of the planet, and welcomes inquiries from prospective graduate students.

His first book, Poetry, Print, and the Making of Postcolonial Literature, was published in 2017 by Cambridge University Press. Drawing on research in Emory's own archival collections, it reveals an intriguing history of relationships among poets and editors from Ireland and Nigeria, Britain and the Caribbean, during the mid-twentieth-century era of decolonization. The book examines work by such leading anglophone poets as Seamus Heaney, Christopher Okigbo, and Derek Walcott in print, even as it makes the case for the need to read them alongside their less prominent contemporaries. Essays related to this project appear in the Journal of Commonwealth Literature, Research in African Literatures, and The Cambridge Companion to Postcolonial Poetry. He has also written about Irish poets including Sinéad Morrissey.

Having served as co-convener of the 2016 African Literature Association conference, held in Atlanta, and co-editor of a special section of Research in African Literatures (Summer 2017), Religion, Secularity, and African Writing, he is now at work on a new book about contemporary poetry and pan-African literary communities. Recent publications include essays about contemporary African poetry chapbooks in Jacket2, new Nigerian publishers in the Journal of African Cultural Studies, and African literary prizes in ELH.